When I tested Asus ROG’s Zephyrus G14 a year ago, I was blown away. Not only was it just over 3.5 pounds — a weight unheard of for a system with both a powerful processor and a discrete GPU — but it ran even the most demanding games at much better frame rates than any gaming laptop we’d ever seen at that size. And then everything else about it — the keyboard, the touchpad, the audio, the battery life — was also great. The G14 wasn’t just better than other gaming laptops in those areas: it was better than most other laptops at its price point, period.

Given the G14’s resounding success, it was only a matter of time before Asus put it in a 15-inch chassis. The formula wasn’t broken, and Asus didn’t fix it — Asus just made it bigger. While I had some questions when I heard the G15 was on the way (could it deliver the same combination of portability, battery life, and performance as a 14-inch product? Could it do that without costing over $2,000?), what’s become clear throughout my testing period is that the device isn’t just as good as its 14-inch counterpart; it’s somehow even better. Asus and AMD have done it again. 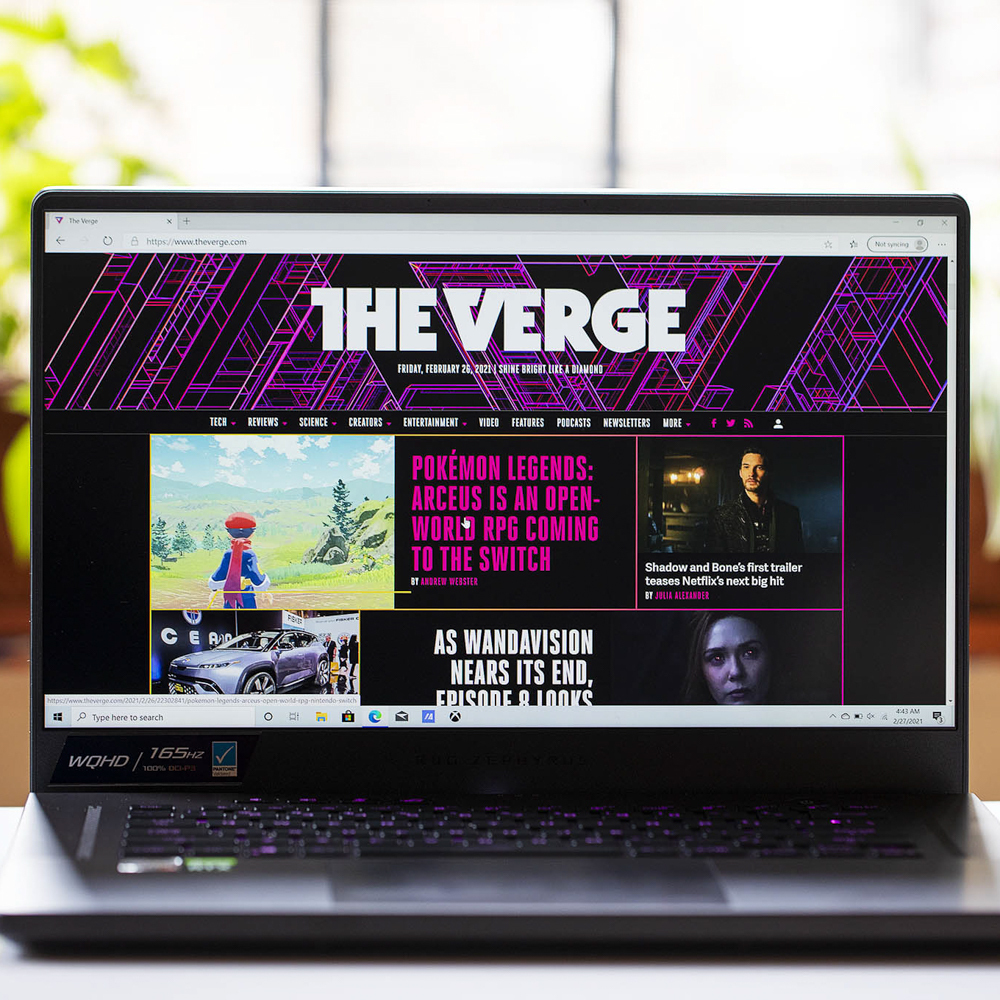 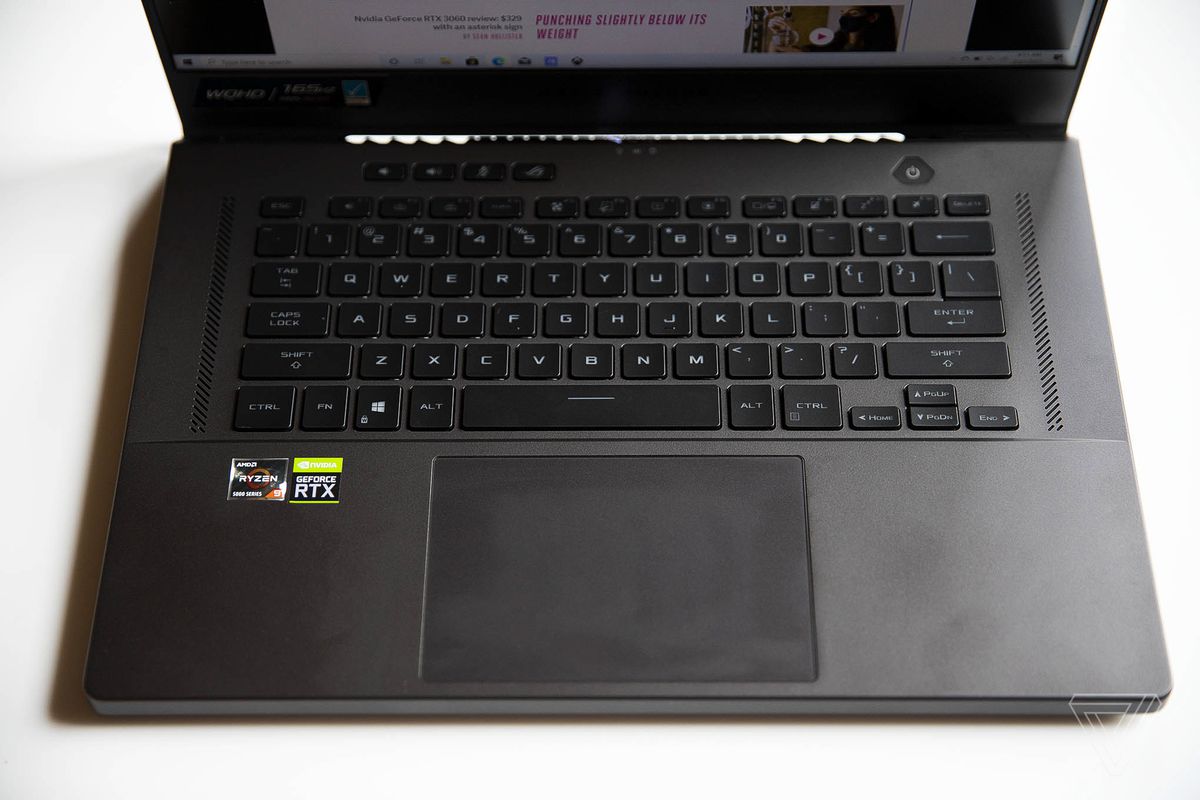 Another highlight, consistent across all models, is the G15’s 165Hz QHD display. We’re finally starting to see 15-inch laptops with QHD screens en masse this year, indicating that this is the first year that manufacturers think mobile hardware is powerful enough to take advantage of them. Traditionally, mobile gamers have had the option of a 1080p display or a 4K display. (Not only is the latter quite expensive, but very few laptops can run demanding games at playable frame rates in 4K.) 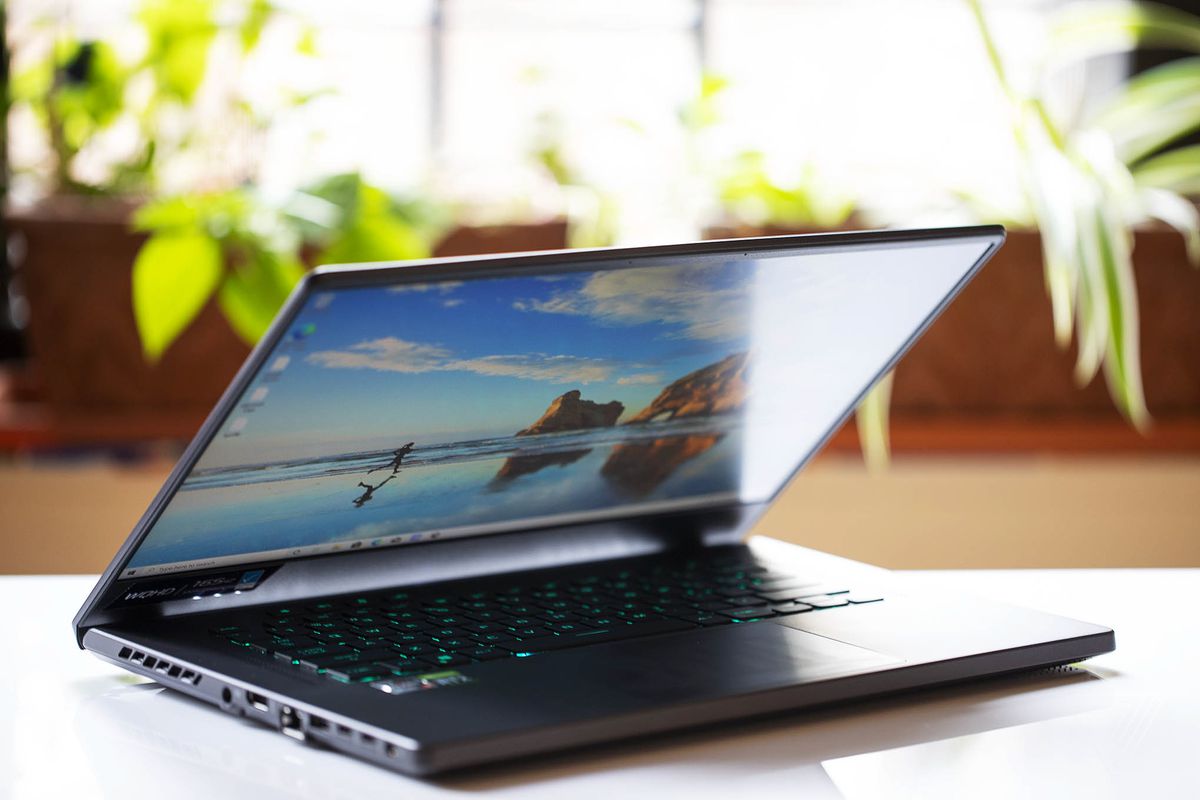 So, the big question: Can the Zephyrus G15 run games at QHD resolution? The answer is an emphatic yes.

Some raw numbers to start. The G15 averaged 178fps on CS:GO at maximum settings — dust particles, fires, and other graphically intensive effects looked just fine. Red Dead Redemption II, also at maximum settings, averaged 58fps. (Come on, that’s basically 60). Ray tracing was no problem for this machine: the system averaged 61fps on Shadow of the Tomb Raider with ray tracing on ultra, and a whopping 81fps with ray tracing off. Remember, the G15 is running these at QHD resolution, which is already a bigger haul than traditional 1080p.

Ray tracing was no problem for this machine

Those frame rates mean you should be able to run whatever game you want in QHD without bumping down any settings. They put the G15 about on par with MSI’s GS66 Stealth with an Intel Core i7-10870H and a GeForce RTX 3080 Max-Q — the two laptops tied on Red Dead and were just one frame apart on Tomb Raider. MSI told us that the QHD GS66 model costs $2,599 — so the G15 with an RTX 3070 is getting the same frame rates for literally $800 less. The G15 also did better than the QHD / RTX 3070 Intel configuration of the Razer Blade 15 Base (53fps on Red Dead, 46fps on Tomb Raider), which costs $400 more. Those differentials should speak for themselves. Yes, the GS66 has a 240Hz screen, but that’s going to be excessive for most people at QHD resolution. If I didn’t already know where the G14 was priced last year, I would be emailing Asus to check if $1,799.99 was a typo. It’s an unbelievable value.

The games all looked great on this screen, which covers 100 percent of the sRGB gamut and 89 percent of AdobeRGB, and maxes out at 334 nits of brightness. It isn’t the highest refresh-rate screen you can get at 165Hz — Razer’s Blade 15 Advanced has a 240Hz QHD model, as does MSI’s GS66 Stealth — but it’s still a significant step above the Zephyrus G14’s 120Hz display. While the G15 doesn’t deliver the best picture I’ve ever seen, it still looks great and certainly improves upon the G14’s 1080p panel. Movement was all smooth, without a stutter in sight, and colors looked great. I saw a small amount of glare when using the device outdoors, but it was still quite usable at maximum brightness. 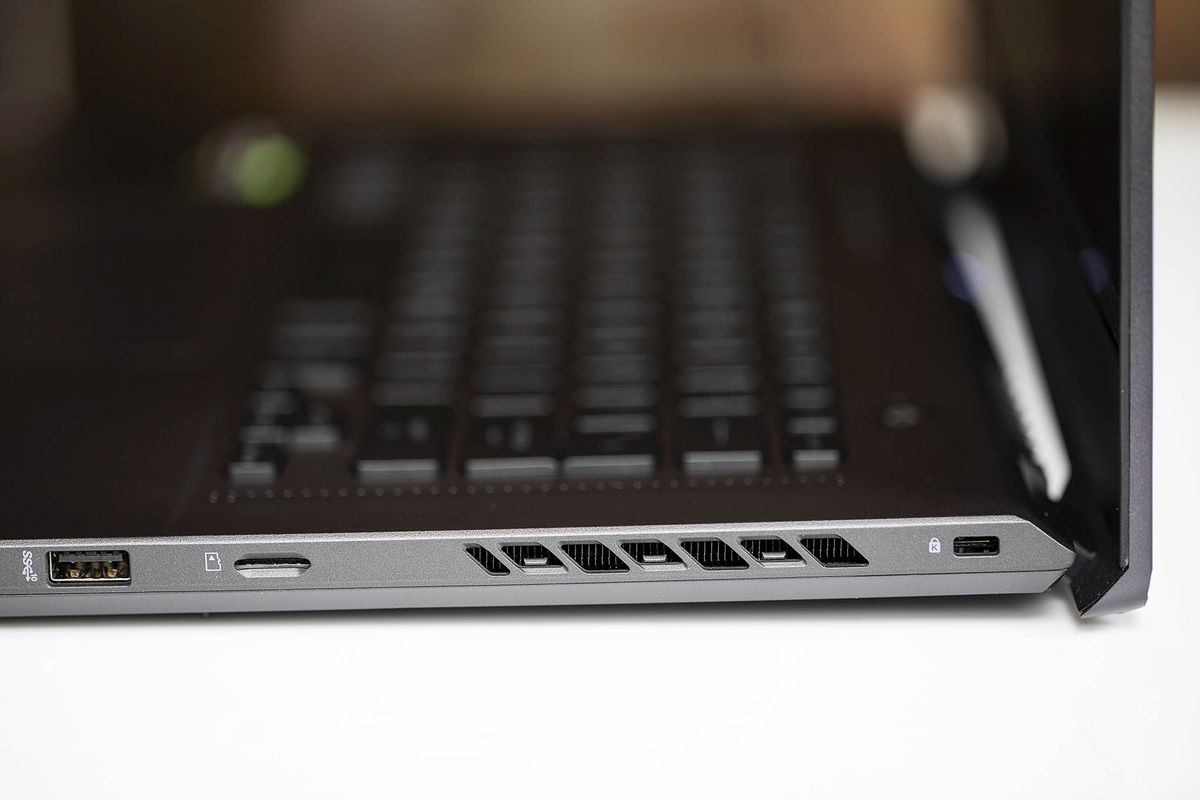 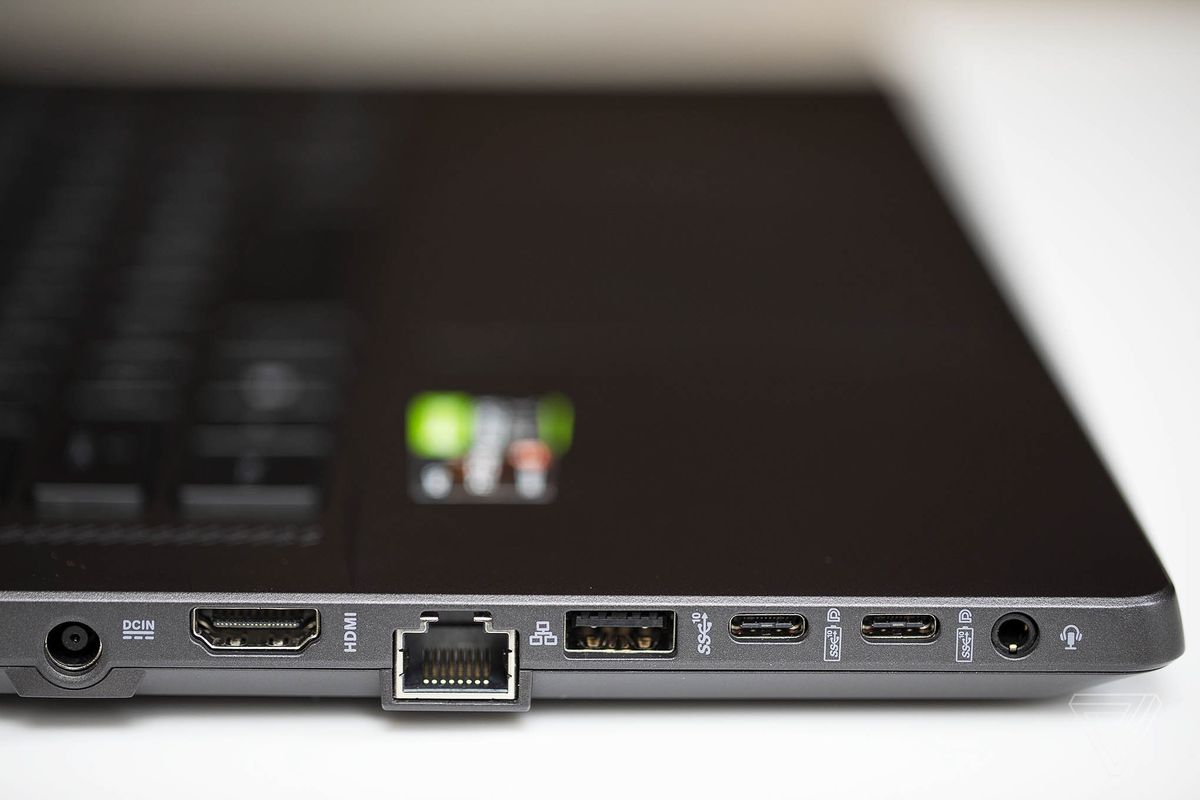 Cooling, while sometimes iffy on the G14, is stellar on this device. The G15’s “intelligent cooling” system includes two 84-blade fans and six heat pipes. It had no problem with any of the games I threw at it, spending the vast majority of its time between the mid-60s and mid-70s (Celsius) and never jumping above 80 degrees. That’s some of the best cooling performance I’ve ever seen from a gaming laptop, especially considering that this one was running heavy AAA titles, maxed out, at QHD resolution.

Cooling is stellar on this device

More impressively, the fans managed to do this without being deafeningly loud. I could certainly hear them while the machine was under load, but it was standard gaming-laptop noise, and I had no problem hearing game audio. You can also swap to the “Silent” profile in Asus’ Armoury Crate software. That toggle lived up to its name and completely silenced the fans, without causing any heat or performance problems that I observed.

Speaking of audio, the G15’s speakers also sound great. That’s to be expected — there are literally six of them, including two front-facing tweeters and force-canceling woofers under the palm rests. They deliver clear audio with very strong bass and powerful percussion. I don’t often get to say that about laptop audio, especially on gaming laptops. The G15 comes preloaded with Dolby Access, which you can use to jump between equalizer presets for gaming, movies, and music, and it makes a huge difference.

There are three microphones, which had no trouble picking up my voice. They also have presets for game streaming, music recording, and conference calls. Those are handy, but they’re not enough to make the G15 a good choice for remote work because it doesn’t include a webcam. The G14 also didn’t have a camera — Asus seems to have decided that webcams aren’t necessary on Zephyrus products. It’s the one significant knock against a device that is basically perfect otherwise. It’s also very odd to have such an advanced microphone setup and not have a webcam to go with it.

There are a couple other things to note about the G15’s chassis. Like many other Asus laptops, the G15 has an ErgoLift hinge, which folds under the deck when the laptop is open and lifts the keyboard above the ground. This is supposed to create a more ergonomic typing position, though I can’t say I ever noticed the difference. It does dig into your legs a bit if you’re using the laptop on your lap, though. The G15’s hinge isn’t as sharp as some other hinges, but as a frequent couch user, it’s still not my favorite feeling.

The keyboard and touchpad are both great

The keyboard and touchpad are both great as well. The G14 had one of my favorite keyboards of 2020, and the G15’s is quite similar. The click is comfortable, with 1.7mm of travel, and the dedicated volume keys (a Zephyrus staple) are quite convenient. There’s a fingerprint sensor built into the power button, which is on the top right of the keyboard deck.

The touchpad is massive, at 5.1 x 3.4 inches — 20 percent larger than that of the prior G15 generation. It’s so big that large portions of both my hands were resting on it when they weren’t typing, rather than on the palm rests. This was a bit annoying, but to the G15’s credit, it didn’t cause any palm-rejection issues. It’s also a bit loud and not the easiest or deepest click, but those are nitpicks — it’s a fine touchpad. 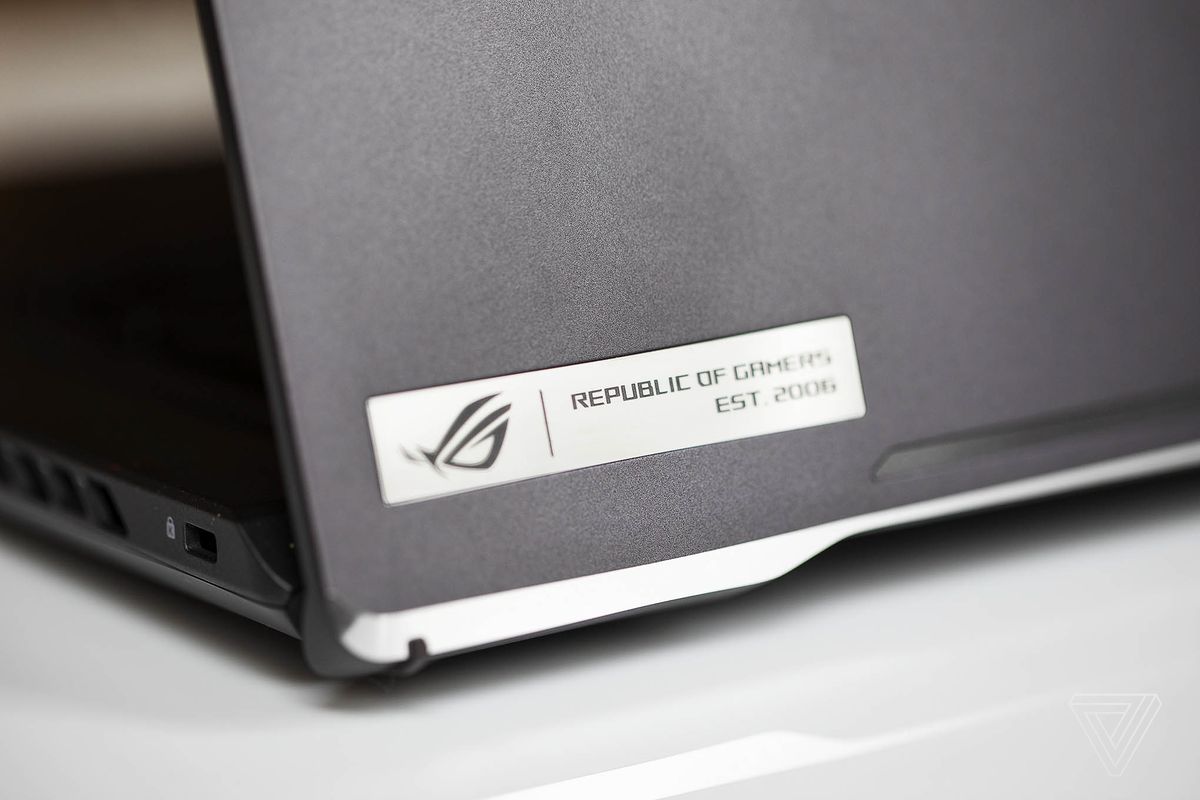 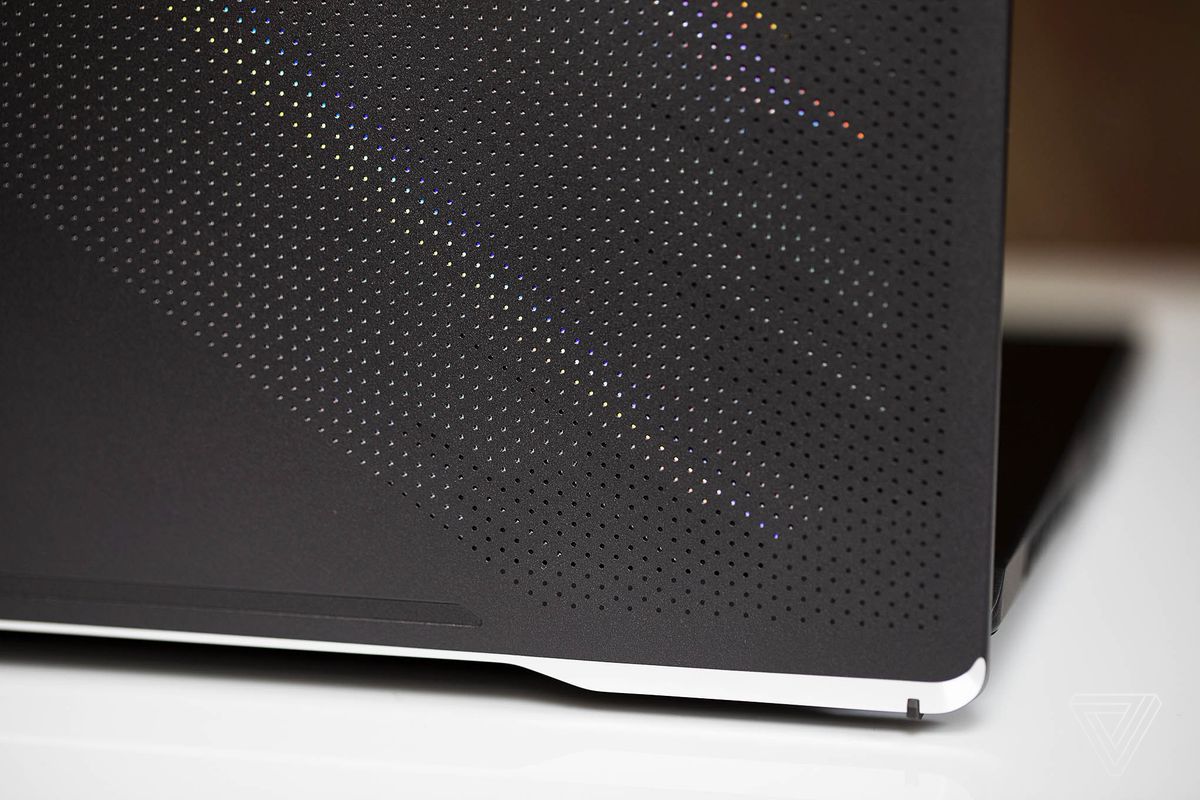 But what impressed me the most about the G15 is its battery life. This thing never dies. Using it as my daily driver with an office workload on Asus’ Silent profile around 200 nits of brightness, I averaged eight hours and 32 minutes. That’s just under what I got from the G14, and the G15 has a larger and higher-resolution screen to fuel. The result puts the G15 right up there with its smaller sibling as one of the longest-lasting gaming laptops we’ve ever seen. It has a large 90Wh battery inside, but plenty of gaming rigs with comparable bricks can only make it a few hours on a charge.

Gaming significantly shortens the G15’s life span, of course. I got an hour and 21 minutes of Red Dead out of one charge. Impressively, though, the game was quite playable for much of that time, avoiding stutters and performance issues. The game didn’t drop below playable rates until the G15 was down to 10 percent with six minutes remaining. The 200-watt charger also juices the G15 decently fast — during very light Chrome use, it got the device up to 60 percent in 37 minutes. If you don’t want to carry that heavy brick around and aren’t doing GPU-intensive tasks, the G15 also supports 100W Type-C charging. 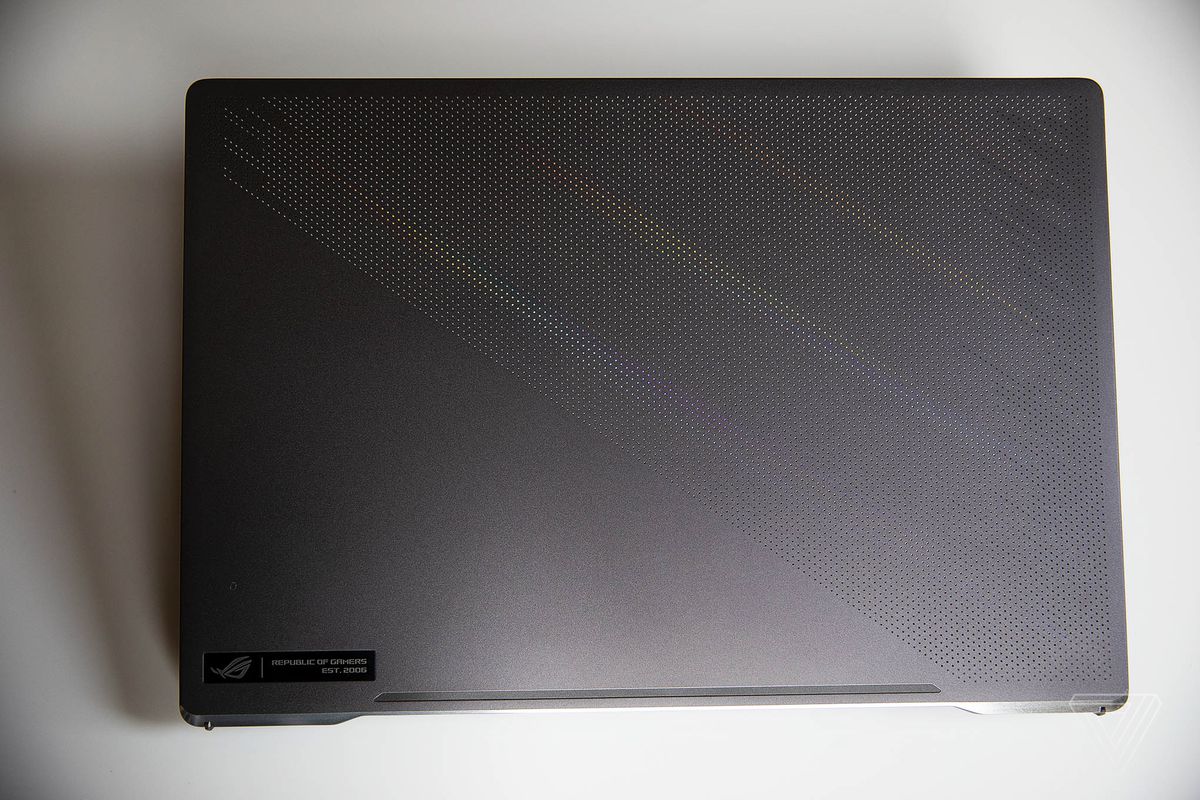 At the end of the day, there are things I can nitpick about this device. In particular, the lack of a webcam is egregious. And there are reasons it won’t be for everyone. Folks who are looking for a higher refresh-rate screen may prefer to spend more on a Blade 15 Advanced or a GS66. Those who want a jazzier design may find Asus’ Strix Scar 15 a better fit. And while $1,799 is a great value for these specs, anyone on a tighter budget has options like Lenovo’s Legion 5 on the table.

But almost everything about this laptop is fantastic. And not only is it fantastic, but it’s fantastic for several hundreds of dollars less than its QHD competitors. If you are willing to use an external webcam and you don’t need a 240Hz screen, there’s really no reason you should be buying any other QHD laptop in the thin 15-inch class. The G15 is superior on battery life, superior on power, superior on weight, and superior on price. It’s just the best.