It shouldn’t come as a shock, but electric bikes can weigh a ton. It’s not uncommon for an e-bike to tip the scales at 50 pounds or more. Electric cargo bikes are even heavier, topping out at 80–90 pounds. So for anyone looking for something more in the flyweight category, here comes three-time Tour de France champion Greg LeMond with a handsome new lineup of battery-powered bikes.

LeMond unveiled his first two models earlier this year: there’s the high-step frame Prolog and the more accessible Dutch with a step-thru frame. Both are extremely lightweight, which LeMond says comes from his desire to buck the trend of heavier (and usually more powerful) e-bikes.

“I truly believe in e-bikes and how it will change people’s lives from a health perspective,” LeMond told me in an interview late last year.

“I truly believe in e-bikes”

The frames of both bikes are made of carbon fiber, including the forks, fenders, and seat posts. Depending on your opinion about carbon fiber, this is either really great or merely okay. Racing enthusiasts love carbon fiber bikes, while riders who use their bikes for daily transportation or off-roading tend to prefer something stronger, like aluminum or titanium. Also, carbon is more expensive to manufacture, which usually results in higher prices for consumers. But LeMond has his own carbon fiber business, LeMond Carbon, which shares some employees with his bike company.

LeMond’s new e-bikes are undeniably attractive — that pink paint job is so winsome, I really love it — but are probably not what many people would expect from the two-time Road Race World Championship winner (1983 and 1989) and three-time Tour de France champ (1986, 1989, and 1990).

For one, they’re not drop bar-sporting speedsters designed for doing circuits at the velodrome. Rather, LeMond is taking aim at urban dwellers who want a durable e-bike to help get them around a city but who also may need to carry their bike up and down a flight of steps and don’t want to get weighed down by a bulky battery and motor. These are city bikes with integrated batteries and rear-hub motors from Mahle, a German automotive supplier that also makes electric drivetrains for Specialized and a host of other bike companies.

That doesn’t mean there won’t be any racing bikes in future lineups, the cycling champ said. “We still are coming out with performance bikes,” LeMond said. “We are not getting away from my DNA, but that’s going to play probably a secondary role with our e-bikes.”

As the only American to win the Tour de France without the use of performance-enhancing drugs, LeMond is considered by many to be among the greatest American cyclists of all time. He is undeniably one of the great all-around cyclists of the modern era and an icon of the sport’s global popularity. 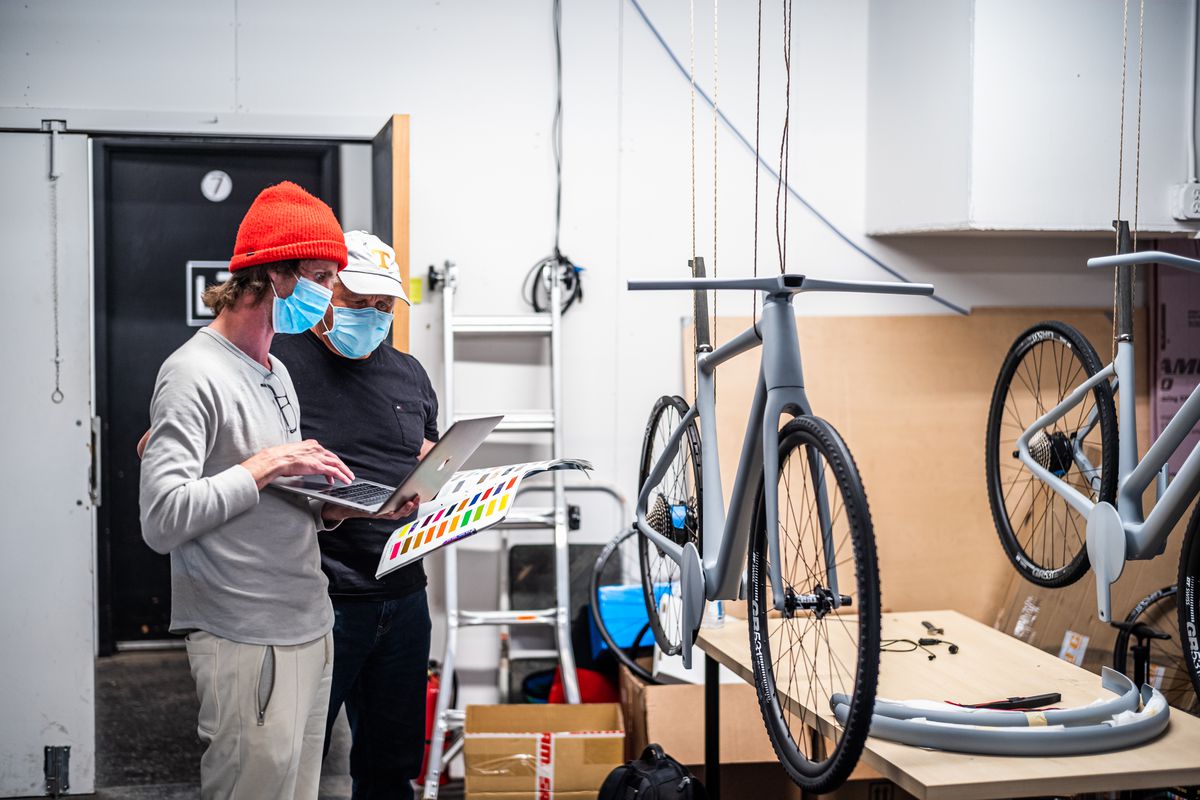 LeMond first encountered electric bikes seven years ago when a friend from the Netherlands who works for Japanese bike manufacturer SunTour let him test out some of the company’s electric motors. The experience, he said, was “transformational.”

“The only thing that comes close to being like a bionic person, you know,” LeMond said. “The Six Million Dollar Man.”

The Prolog (pronounced like “prologue”) was originally slated for a February 2021 release but didn’t end up shipping until late March. At 26 pounds (11.8 kg), the Prolog finds itself in the same category as Gogoro’s similarly lightweight Eeyo 1S — and it will fall in that upper-tier price bracket as well, with a price starting at $4,500. (Like I said, carbon fiber ain’t cheap.) The Dutch, with its low-step frame and mustache-shaped handlebars, will come out later in the year.

With the LeMond name emblazoned on the side, the performance is obviously a top consideration. The Prolog’s motor kicks out 40nm of torque, which is less than the 60nm of torque provided by the Brose S Mag motors on the similarly priced Serial 1 e-bikes from Harley-Davidson, but more than the 20nm torque provided by the Eeyo 1S’s 250W Smartwheel motor (although Gogoro claims its Smartwheel actually puts out 50nm).

The bike has a top speed of 20 mph, thanks to a 36-volt / 250-watt power supply, which is fed by a nonremovable 250 watt-hour battery. The amount of boost delivered can be adjusted with three levels of power assist. The cranks, derailleurs, chainrings, and brakes are from Shimano. The bikes roll on 30cm Panaracer GravelKing Slick+ tires and Token aluminum rims.

The bike has a very clean look, with all the wiring fed through the frame. There will be three frame sizes: small, medium, and large. And both bikes have integrated lighting in the front and rear that feed off the internal battery. 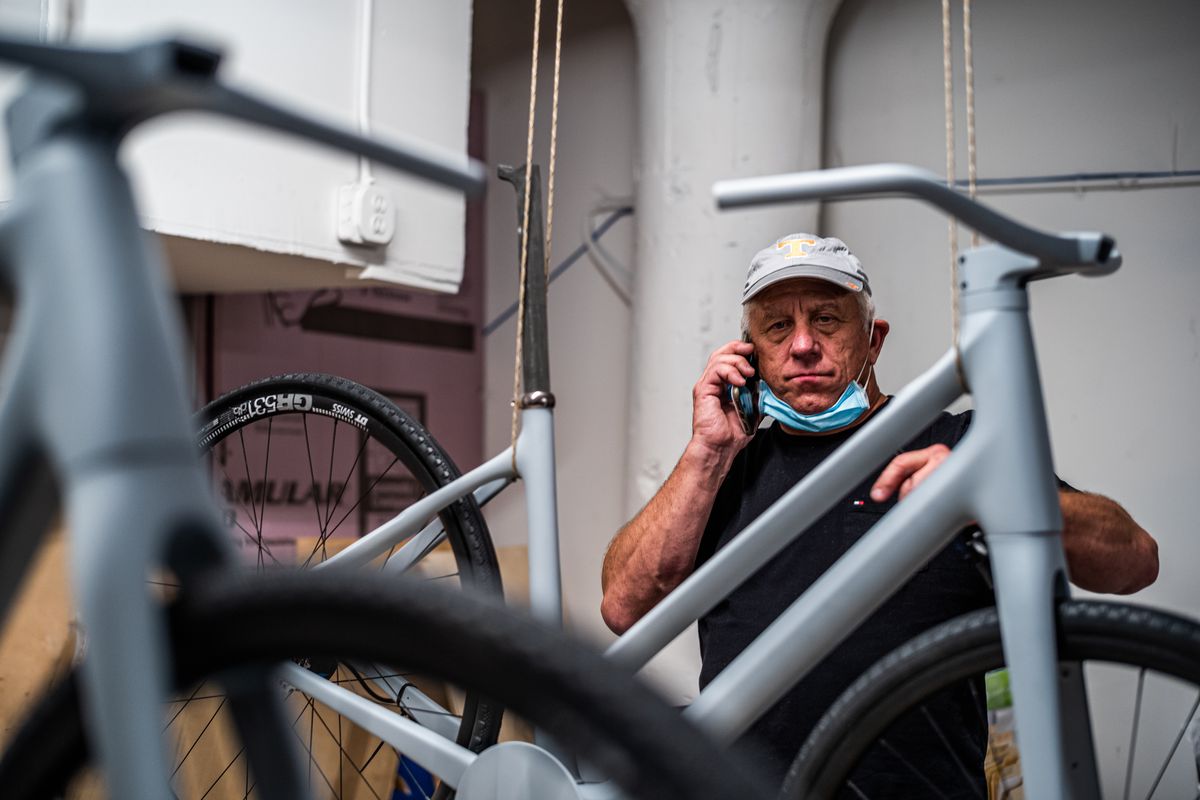 LeMond launched his first bike company in 1986, and since then, his career as an entrepreneur has been a bit of a rollercoaster ride. According to Bicycling magazine, this is currently the fourth iteration of LeMond Bicycles. One previous version was a licensing deal with Trek that ended poorly, with Trek asking a federal court to dissolve its partnership with LeMond citing “inconsistent business dealings.” LeMond responded by suing Trek, which the Wisconsin-based company characterized as containing false and irresponsible allegations. A spokesperson for Trek did not immediately respond to a request for comment.

For his part, LeMond claimed that Trek “literally tried to destroy my business, which they did. They put me out of business.” That said, he said he wishes he had handled the Trek partnership differently. “I spent eight years defending myself. My only regret was not cutting ties much sooner and then instead of defending myself, hoping to repair a relationship, I would have gone on my own,” he said. “Instead of being in a defensive mode, I would have been in an offensive mode, building something rather than trying to protect something that probably wasn’t going to sell anyway.”

He continued, “This was all a strategy for Trek to kind of basically paint me as a bad business person, and that stuck. It’s sad, but people will have their own opinion.”

“This was all a strategy for Trek to kind of basically paint me as a bad business person, and that stuck.”

The original plan for his new venture was to manufacture the e-bikes out of a 65,000-square-foot facility in Oak Ridge, Tennessee, but that plan appears to be on hold. Most e-bikes are built in China, and initially, LeMond’s bikes won’t be any different. He hopes to also add a production line in Sweden, while some of the components, like the lights, fenders, and baskets, will be manufactured in Tennessee. Eventually, the goal is to have production lines up and running in three continents: the US, Europe, and Asia.

“I don’t want to speak too quick, but we are going to bring some amazing things up in the next 12 months,” he said. “These are made by us. This is not an outsourced deal.”

LeMond insisted that all of the speed bumps he has hit in his post-racing life have been extremely minor. “The hard part for me is I’m not just a person; I’m a business,” he said. “So there’s been some contractual disputes… and that’s it.”

This new venture, and these new bikes, offer a chance at redemption for LeMond. His racing career is in the rearview — and e-bikes, he said, are the future of cycling.

“We’re real,” he said. “For real. We’re not just marketing or graphic design, which most companies are. Some are just outsource companies. We are literally assembling things. We are making these bikes.”